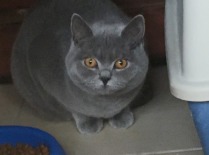 Fluff's buddy, a bit quieter but ever so sweet. Fluff and Frankie have grown up together. Frankie is Bluebelle and Albie's daughter, she has Albie's dense coat and bright copper eyes and bluebelle's silvery blue colour.

Frankie had her first litter in 2017 and was a fabulous mum.

She is blood group b. 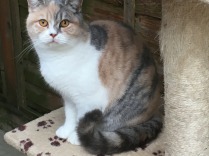 Lola is Maddie and Bertie's baby, she is a blue cream and white tabby (or Tri-colour) and is a lovely little lady with beautiful markings. She carries colourpoint from her mum and i am loving having some colourpoint kittens - they are born white and their points develop by about 5 weeks so it's always exciting to see what colour we get !

Lola is blood group b.

Jess is Moon's daughter. She is the most sweet natured and soppy girl you could imagine and when she became a mummy in 2018, she proved that she was as good at nurturing her babies as her mum is.

Jess is a black silver tabby with a fantastic coat - photos dont do her justice ! She is good friends with all the girls and Benji loved having her live with him ! 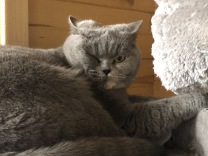 Bambi is our homebred youngster, she is a blue cream from Bertie's last litter with Barbie before he retired, and is a little darling. She's sweet and unassuming but playful and loving and when she first moved in to the cattery,  the big cats really took her under their wings and Daddy Bertie kept a particularly close paw on her. 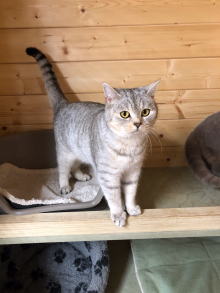 Introducing the kitten we had been waiting for from Liana...

Angel is a black silver snow spot and is absolutely stunning ! She  enjoyed her kittenhood in the house with us, often sleeping next to my head and tearing abound the house chasing her tail or trying to persuade Spike (who is now an old man) to play hide and seek with her!

She's now a grown up girl (well, teenager !) living with the adults in the cattery, still playing and enjoying herself. She is a darling and purrs as soon as you look at her. Angel became a mum for the first time in 2019 and we couldnt resist keeping Buttons from her first litter. 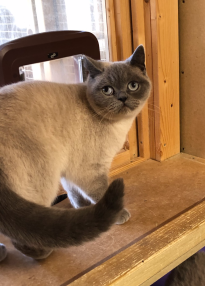 Harley is my first home bred colourpoint baby - she's a blue point with lovely blue eyes and a very loud purr. She stayed indoors for a while playing with the little kittens but when i took her out to visit the cattery, she made firm friends with Bambi, Molly and Fluff and didn't want to leave. She plays all day, wearing out the older girls who genuinely seem to adore her high energy company.

Goldie is Liana's daughter by Benji from his first litter - the 3 girls they had were all so beautiful i could have kept them all, but as often happend, Goldie let us know she wanted to stay. She is a black golden (mackerel) tabby, chunky and soppy with a beautiful round head and expressive eyes.

Goldie is really playful and LOVES hiding and playing in tunnels.

She is blood group A

Paw is a beautiful, gently, chilled out and easy going girl. She is Moon's daughter, Jessie's sister, and looks and acts so much like her mum that sometimes i accidentally call her Moon !

Paw has become a mummy for the first time in May 2020 and its impossibe to believe this was her first litter, she's an absolute natural and instinctive mummy.

Mouse is Cleo and Noah's daughter. She has her Dad's size (she is a big girl and not fully grown yet) and her mum's sweet nature. Mouse is a second generation homebred baby and i cant wait for her to have her first litter. She and Teddy (her first boyfriend) have been like a married couple - he won't leave her side (that's his blue bottom next to her in the pic !).

Poppy is Lola and Noah's daughter. She is a blue cream tabby bi-colourpoint - in some lights, parts of her look lilac, but that's the tabby effect. She's gorgeous and unusual and photos dont do her topaz blue eyes justice. Poppy is getting big already - i think she's got her size from her dad !

Bitzie is a lilac tortie and is a sweetheart. She's growing in size and confidence surrounded by her girls in the cattery, and enjoying sharing with the other youngsters whilst she gets more interested in sniffing those boys when they get close ! 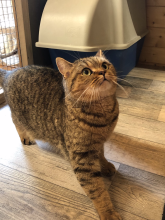 Goldie's mini-me, its actually hard to tell them apart but if you look closely, Tiger is even golder than her mum !!

Tiger is confident and takes no nonsense - it doesnt matter who was on the top bed first, that space is hers !!! She will also reach for your hand and pull it back if you stop stroking her before she has had enough !

Tiger has just become a mum for the first time and is a natural, looking after her babies and even taking her friend's baby to feed whilst mum was in labour with the next kitten. 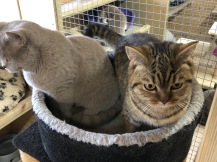 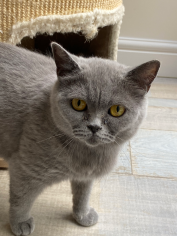 Tessa and her sister, Tasha, came to join my brood in May 2021 from the lovely Caroline. These girls are such sweethearts - they both have a relaxed and soppy demeanour that we all love - human and cat family alike ! Both girls are proven queens and experienced mums and that gives them a certain maturity and understated seniority in the cattery ! They have fitted in beautifully and i am delighted to have been trusted with them.

Both girls are blue selfs and PKD clear 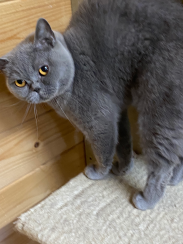 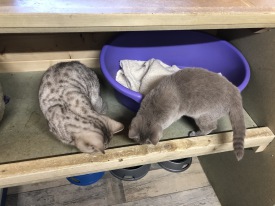 Little Lilac Lilly is Cleo and Ted's daughter. She wasn't meant to be staying but she buddied up with Buttons and made herself so comfortable - on the bed, IN the bed, in the shower....

The 2 friends have just gone out to join the big girls, and they love it !