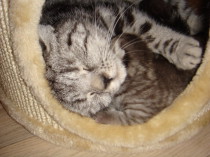 British Shorthairs are the most popular breed of cats in the UK.

They have very dense, plush coats that are often described as crisp or cracking, referring to the way the coat breaks over the cat's body contours. Their eyes are large and round. They have round heads with full, chubby cheeks and a body that is rounded and sturdy. British Shorthairs are large and muscular, and are described as having a cobby build. The breed has a broad chest, shoulders and hips with short legs, round paws and ﻿

a plush but not fluffy tail. These are the characteristics listed in most governing bodies breeds standards to which show cats must conform.

The males of this breed are larger than the females, and the size difference between them is more easily noticed compared to other breeds. As with many breeds the adult males may also develop prominent cheek jowls that distinguish them from their female counterparts. The typical lifespan of this breed is 14 to 20 years. The British have few health issues.

The males' average weight is 4 -7 kilograms, whereas a female would weigh 3 - 5 kg.
The British Shorthair is a big soft lump of a cat. These are the ‘gentle giants’ of the cat world. They are loving and affectionate. They are good with children and other animals. They do not have the curious nature that gets many foreign breeds into trouble and if allowed out in the garden they are unlikely to roam. However, they have a stable character and take well to being kept as indoor only cats. This is ideal for apartment living. It also keeps them safe from harm that might befall them outside.

They are politely demanding of attention and they will let you know if they feel like playing - they enjoy mouse type or stick style toys or even a screwed up paper ball. They are not hyperactive or "in your face cats" sometimes preferring to sit next to you or near you rather than on you. They will tend to supervise household activities either watching from a comfy perch or laying on the floor nearby.

British Shorthairs are wonderful cats for people who work as they are very happy just to laze around the house while you are out. However, they are social cats and dont like to be alone for long periods, especially as kittens. If their humans are regularly out at work, they will enjoy having another British Shorthair or a cat with a similar temperament around to keep them company.

They like attention and enjoy being petted. They can be a vocal breed and will meow to communicate with their owners. For example when they are hungry and you are preparing their food they will meow at you. They may also meow, purr or growl at their favourite toy as they play with it. British Shorthair cats have a tendency to follow people from room to room as they want to be with you and see what is going on. Many enjoy being cuddled but some prefer to keep four paws on the ground and have you pat them rather than pick them up.

The British Shorthair does not require a lot of grooming because the fur does not tangle or mat easily. However, it is recommended that the coat be brushed now and again, especially during seasonal shedding.

British Shorthair owners have reported that their cats have spontaneously started to play fetch with toys like dogs do, showing how quickly their cats can learn small tricks, and the breed has become a favourite of animal trainers because of its nature and intelligence. In recent years these cats have appeared in Hollywood films and television commercials. A British Blue is the face of Sheba cat food and a British Shorthair silver tabby is the face of Whiskas. The Bacardi Breezer commercials also featured a silver tabby British Shorthair.